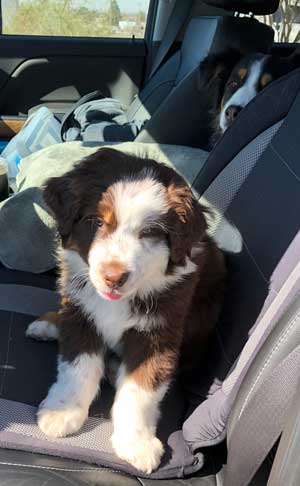 Meet Rufus the pup! He’s a 9-week-old Red Tri Australian Shepherd, who came from the same breeder as Remy and Reese. He’s a big boy, he’ll likely weigh 65+ lbs when he’s grown. He’s also very smart (too smart for his own good!), and VERY strong-willed. But he’s also a sweetie!

With Remy’s passing 2.5 months ago, normally I would wait six months or so before even considering a new pup, to allow proper a period of grieving. But the breeder is calling it quits after decades of breeding these dogs, so I decided to get the very last pup of his very last litter. 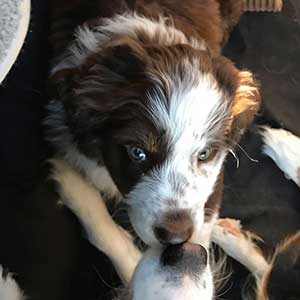 So, Rufus spent a week with me on the road from his origin in Texas to my spot at Elephant Butte Lake, New Mexico, and then my mom got him and took him to Tucson for a few months of intensive training. As of this writing, he’s been there two weeks and while challenging, he’s doing very well! He’s nearly house broken and crate trained. I’m so grateful that my mom offered to do this, I have no idea how I would have managed in the RV through all of that. Although I am current stationary in NM addressing some repair issues that have delayed me from getting to the next spot for work in the midwest.

Reese wouldn’t have a thing to do with Rufus for several days after we picked him up from BFF Nancy in Texas, who grabbed him from the breeder on schedule while I travelled over to Texas from AZ. But after a little time, Reese warmed up to him and. She also set some boundaries with him, role-modeling an adult dog.

We’re all looking forward to having Rufus join us on the road in a few months. Something tells me he’s going to be a lot of fun!