A little more than a year ago, in September of 2017, a tragedy of sorts occurred on this road life I live. I struggled with sharing this on here, mostly because of pride issues, but hey, this is an honest portrayal of my experiences RVing, so this story belongs here.

First, let me set this up by stating that ordinarily I am quite vigilant about certain things while navigating with my house behind the truck. I’m usually very careful. I never drive more than 70 mph, I fuel only at truck stops, mostly Flying J (most have RV islands) and because with the jet ski trailer behind the 5th wheel I am 64 feet long, I consider every route with a viable way in and out. And yes, I am always checking clearance heights, especially when I get off the beaten path.

I decided to take a trip to Ohio to meet BFF Nancy so she could hand off Remy to me for the winter. She has a daughter in that area she would visit after that. Before I left, I attended an industry conference on Cape Cod, MA. Around 8 PM on Friday, I set off on the journey, with a plan to get as far as I could. I will spend the night at a Walmart, and continue on the next day. The meet in Ohio was planned for Sunday afternoon.

Ominous Warning, Which I failed to Heed

As I was preparing to leave, I remember thinking that I was pretty tired from the conference, and that the weather forecast called for rain and fog in the northeastern states. I remember thinking maybe I should overnight where I was and depart first thing in the morning. I had the time. Alas, I overruled my better judgment and hit the road.

I drove until about midnight, and was in southern Connecticut when I decided it was time to pull off. It was late, and there were dense patches of fog. I located a Walmart in Old Saybrook, CT which was very close. I would learn later that I had just passed the exit GPS would have normally routed me to get there. Instead it routed me to the next exit down.

After exiting, I needed to make a left turn and proceed up that road and the Walmart was up a mile on the left. As soon as I exited, everything got dark and foggy, there were no street lights. I made a left to go under the freeway and without even thinking about bridge height proceeded underneath. I initially cleared it, but due to the road sloping upward, the front A/C on top of the RV crashed into the far edge of the bridge. Before I even realized it and stopped, the RV was clear. I stopped in the road to survey the damage, in a total state of shock. Because there was no place to pull off, I got back in the truck and proceeded to the Walmart. 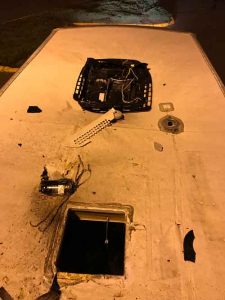 It was then and there that I would see the horrifying extent of the damage to my house. The front A/C had ripped right off and was mostly gone, the vent fan over the bathroom was gone too. The A/C compressor pump was impaled into the roof. The debris from the front A/C had totally ripped off the satellite TV antenna midship. I stood up there on the roof paralyzed at what had happened.

Then I looked up and saw a police car speeding down the road I had just traveled up with his flashing lights on. A moment later another chased the first. I thought, I bet I know who they’re looking for. Minutes later, they pulled into the parking lot, exited their vehicles and asked if I hit the bridge, to which I responded affirmatively. They asked me to come down off the roof to talk about it, which I did, and we did.

Fun with the Police

According to the cops, I was guilty of a crime by leaving the scene of the accident as well as some potential liabilities regarding the bridge property. Turns out it was also a commuter railroad bridge. I explained that I was in shock, there was no place to safely pull over, and the Walmart was my destination so I just pulled up here. All in all, they were ultimately pretty nice about it, but they did say they’d have to give me a ticket.

While they did their thing writing the ticket, I began to figure out what I would do here. Obviously, the trip to Ohio would be cancelled. Thankfully, due to timing Nancy had not yet left Texas, so I was able to let her know. In fact, she got out her therapist skills and did a great job of being supportive of me in this time of crisis.

After I got through the shock period, I started to put together a plan to get back to New Hampshire. A plan with many variables. The forecast had called for rain all night, but it seemed to clear up. I have holes in the roof.

The plan began with getting the remaining debris off the roof and into the bed of the truck. My poor dog Reese had to just hang out in the backseat while I did all this. She knew something was wrong and was very worried.

The police were very supportive of the cleanup process, standing around, chatting among themselves and watching me do everything. I eventually got everything cleaned up and ready to go, and asked the police how I was to get the front A/C unit from the accident site. They did me a solid and said to not worry about it, that they would have it taken care of.

Get the Heck Out of Dodge

I decided to drive north about 50 miles to another Walmart, as I just wanted to get the heck out of this place. On arrival there, I parked and went into the RV and slept in my bed, under the stars, hoping it wouldn’t rain. Walmart had tarps, and I already had one in the baggage compartment of the RV.

I arrived at the second Walmart around 3 AM. A call came in around 5 AM by the Amtrak police with questions about my insurance. Although the guy did say that an engineer had inspected the bridge and it doesn’t look like there was any damage other than a scrape. I slept a few more hours, awoke and started driving north.

The Day After. What Should I do Now?

On the way back to New Hampshire a million questions went through my head. How would I deal with this? Should I take the rig back to my seasonal site, tarp it up and call an adjuster? Should I find a repair shop ASAP and see if I can take it right in? It’s Saturday, will I be able to do anything until Monday? Where would I live? In Ossipee, NH, close to where my summer seasonal site is, I had patronized a place called Big Moose RV a few times for parts, supplies, etc. They were really nice people – and they did RV repairs as well.

I called Big Moose and spoke to Catherine Floyd. I explained the whole saga to her and she said she would talk to Mike Stevens, the owner, and get right back to me. When I hung up, I wondered if they would get back to me.

Catherine called back within 30 minutes and said that I could bring the coach to their shop and park it inside their work bay until insurance adjusted the damage. Inside. Dry. Wow. She said if I decided to have them do the work the storage would be free, otherwise it would be $20 a day. Quite reasonable. She also said they could rent me another RV for the time the repairs were being done and that insurance may reimburse for that.

Big Moose to the Rescue! 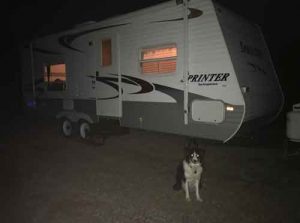 So that’s what I did. The drive to Big Moose was rain-free. Mike Stevens Jr, the owner’s son handled everything. The unit received an estimate and the insurance company approved it. Mike Jr said it would probably take a month to get everything done and the unit back to me, and that turned to out to be pretty close.

The coach got a new roof (replaced 6 trusses), two new A/C’s (apparently the cosmetic damage from the accident to the rear unit justified a replacement), two new roof vent fans, and various other little things. They wound up letting me keep the loaner for a month beyond the initial rental week as part of the deal of letting them do the repairs.

One of the downsides to full timing in an RV is that if anything happens to it, it’s the same as a something major happening to a regular house. Most repairs are drop offs of at least some time. In this case, a lot of time. But that’s just how it goes.

The Moral of the Story

Needless to say, my vigilance around clearances and other potential hazards on the road stays way up these days. I have always made frequent stops, and fully inspect the rig end-to-end on each of these stops. Tire pressure checks, pin box/hitch inspections, inspection and operation of clearance lights, tail lamps, brake lights, inspections of the interior of the coach along the way. I travel with two spare tires at all times.

I’ve averted many mishaps this way. And since the accident, I downloaded and faithfully use a GPS app called RV Co-Pilot, which knows how tall and long I am and routes me accordingly, staying clear of low bridges, etc.

But the real moral of this horrifying, expensive and inconvenient story was something that occurred at the very beginning and what set this entire mistake up: I ignored my better judgement to wait until the next morning to depart Cape Cod. That I will not do again.