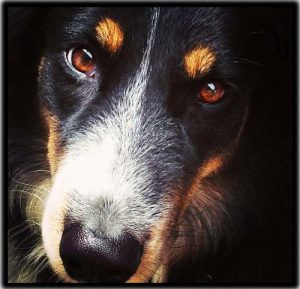 This is is Remy, he’s an 8-year-old Black Tri Australian Shepherd that we’ve had since he was a fresh pup. He was the biggest puppy in the litter and his breeder, Frank Prigmore of BDH Aussies, called him “Big Hoss.” He is the sweetest dawg ever (unless you walk up on us and he doesn’t know you!). Remy is co-parented by me and my BFF, Nancy. He and his sister (actually his niece), Reese, mostly stay with me on the road, and both go everywhere with me every day.

While working in New Hampshire late last February, Remy became very ill. He stopped eating, and slept all the time. I took him to the vet and after a battery of tests no one could figure out what was wrong with him. They treated him for tick borne illnesses to no avail. His platelets were 22 at their lowest. It got so bad I had to carry him outside in the snow to go potty. Getting him to eat anything was very difficult. The last thing he was willing to eat was cheese, and he even stopped going for that eventually.

They decided to give him prednisone and within 2 days he got better and started eating again! But they still did not know what had caused the symptoms. He was undiagnosed. He saw an internist as well. No answers. I left NH in April and headed to the southwest, beginning with Texas, where Nancy lives. After a few weeks there I left Remy with Nancy for the summer. Within two weeks afterward, in late May, Nancy called and said he was showing the same symptoms. Back to the vet (pretty much 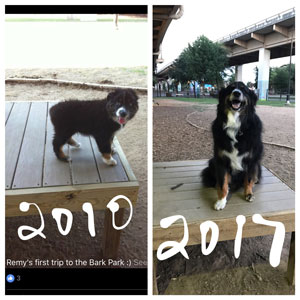 daily) again. He just got worse. Nancy was beginning a new career and had to work a crazy schedule, so the vet let us bring Remy in everyday while they looked after him.

The following Saturday, a very astute vet attending the clinic that particular day decided to biopsy his lymph nodes, which she felt were enlarged. This had been checked many times before, but no one had noted any inflammation.

Remy tested positive for lymphoma, a form of cancer. We were immediately referred to veterinary oncologist Zachary Wright, DVM of VCA Animal Diagnostic Clinic in Dallas. Dr. Wright fit us in right away. Nancy took him, and I was patched in by FaceTime. Dr. Wright told us news that still reverberates in my mind. Lymphoma in dogs is treatable with chemotherapy, and while this extends their life, and they have a high quality of life during the treatment time, only 1% of dogs survive the disease. A test done on Remy determined he had T-cell lymphoma – the more aggressive of two types. With treatment, Dr. Wright gave Remy 6-8 months to live. This can vary depending on the response to the treatment. It would cost thousands. Remy also needed an additional test –  to see if he had a gene that runs in his breed that would prevent certain chemo drugs. He was negative for this.

Nancy and I emphatically agreed that the only thing that mattered was Remy’s quality of life. The money didn’t matter. The weekly trips to the vet and the arrangements at home necessary did not matter. We only cared that Remy did not suffer, as he had been. Dr. Wright assured us that if Remy responds to treatment that he would pretty much be a normal dog, with some down days right after each treatment possible, but not definite. Chemo for dogs is not nearly as bad as for humans. He would 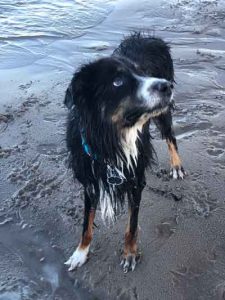 be starting with the CHOP treatment for dogs who have the less aggressive B-cell lymphoma, to see if he responded to it first. He did. He did very well.

As I write this, Remy is at my feet where he almost always is, taking a nap. He has accomplished 4 rounds of 4 treatments each, the last of which was two weeks ago. After 4 rounds, the vet likes to lay off for a month and see how the dog does. He’s doing well. He has a follow up appoint on November 13th, and unless he gets sick between now and then, that’s when they will decide if more rounds of chemo are indicated.

Because Remy needed to migrate to Tucson, where I was on a work project, his care was handed off to vet oncologist Dr. Mary Klein, DVM of Southern Arizona Veterinary Specialty and Emergency Center, with a brief interim period provided by Dr. Brisa Hsieh, DVM due to Dr. Klein’s schedule. All of these doctors have been excellent.

When Nancy and I learned of Remy’s condition, aside from it being automatic that he would definitely be treated, we decided the gift was to enjoy whatever time with Remy we have. That’s what we’re doing! He’s himself (which means the primary focus is FOOD), and he’s having a blast. He’s the best dawg ever!

UPDATE: Remy passed away at 6:37am on Saturday, December 29, 2018 in our RV in Mesa, AZ, with both me and Reese at his side. His cancer had returned earlier in the week and he was seen by his oncologist on Thursday who started more chemo after she discovered a mass in his airway above his lungs. He started to improve within 24 hours, but then by Friday night took a turn for the worse. By early morning he was near the end. Every other time he had gotten sick over the past 9 months, I had always said to him “not yet.” As I lay next to him when he was clearly suffering and struggling to breathe, I told him it was OK to let go. A few moments later, he passed on. I was able to be there with him as he took his last breath, and for that I am very grateful. He was not alone in his transition.

Remy was an amazing dog, and we will never forget him. He brought us so much joy during his lifetime, and now, as we grieve, we remember that joy. Remy’s spirit will be with us forever. I am grateful to have had his constant friendship and unconditional love. I love you Remy. Rest in peace, our boy.