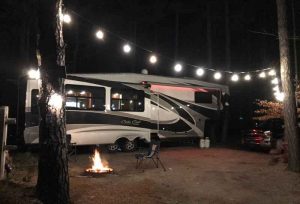 While in New Hampshire on an extended (3 years, 4 months) work project, I got tired of driving around the state to the various sites of the treatment centers I was operationally responsible for and began to toy with the idea of getting rid of the house and getting an RV. The furthest center was 2 hour’s drive from the next closest one, and the driving got old, especially in the winter. So the RV idea began to take root. I had always dreamed of hitting the road, and aside from this work project, which was lengthier comparatively to other assignments, my entrepreneurial make up lent itself to being anywhere I wanted to be, most of the time. So the thoughts grew more serious.

Then those thoughts turned to what kind of rig; a motorhome, a travel trailer, a 5th wheel? I went to the 5th wheel idea fairly quickly for several reasons. One, I have jet skis (and later a snowmobile) and needed to be able to tow them on the same vehicle (triple-tow); two, a 5th wheel could get on the beach of my favorite lake out west, Elephant Butte; and three, a 5th wheel platform is more stable while towing. Oh, and four, they just look cooler. I also considered the tow vehicle, and knew it had to be at least a 3/4 truck, and preferably a diesel.

I was officially living in my new set up! 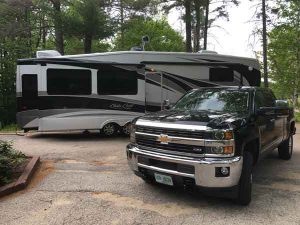 The first place I parked in March was actually on the grounds of one of the treatment centers I oversaw, in an area of the state known as the Ossipee Lakes Region. This was a brand new center we had opened a month earlier and required my constant attention through the startup phase. I stayed on the property (72 acres) near an unopened building awaiting renovation for the next 7 months. It was still cold in NH, but this had been a particularly mild winter, and the summer that followed was amazing.

By the next fall, I moved off the treatment center property and into a campground near Ossipee Lake called the Danforth Bay RV Camping & RV Resort, as a “winter seasonal” camper. You pay a flat fee (+electric) for 6 months, from November to March. I thought, this is awesome, I’ll be here all by myself all winter, only a few crazy people like me would RV in NH this time of year. I was wrong! Within a week of setting up, people started hauling in rigs by droves and setting up too! The entire winter section of the campground was FULL. I remember asking the couple who set up next to me why so many folks were coming. They were snowmobilers, and NH has an elaborate system of trails, particularly in the northern portion of the state. All these folks had homes elsewhere in NH, and would drive up on the weekends to camp, snowmobile, and just have fun. 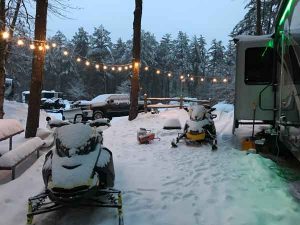 I met some great folks winter camping, particularly the Olson family, my next door neighbors. Mark and Diane, and their son Jeff, and his wife Katrina and their two girls. These folks would become great friends and neighbors. We had a lot of fun over the next two winters. Of course, I needed a snowmobile, so I went out and got one! In fact, eventually I got two!

We spent many days out on the trails, a few of them were all day rides that went into the night. We saw a lot of the beautiful New Hampshire forest and countryside.

Those winters brought challenges. Unlike the others, I was living in my rig full-time, which meant that I needed systems to work and for the place to stay warm. I did have the backup of a bath/shower house the campground kept open year round, but I wanted to push things to the limit, and see if I could self-sustain. It went from “glamping” to survival mode at times. More than once I would have to deal with issues that came up due to the weather. There were numerous sub-zero nights, and a several south of -20 degrees. Before too long, I had a pretty elaborate setup of heating systems to keep everything working. 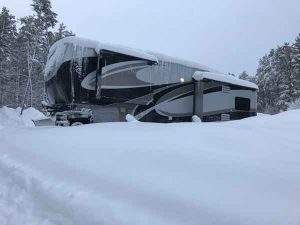 Winter camping in the far north is an experience all of its own. Constant vigilance is required. Checking heating systems, snow removal, planning usage of resources to keep things going was the order of each day. I utilized both propane and electric systems for heating and hot water. This meant I had a rotation of propane bottles, in use and in the bed of the truck, and stopping at Tractor Supply every 3-4 days was part of my routine. I opted to not have a supplier hook up a larger propane tank because there were times during these winter seasons when I would need to reposition the RV down south for work, and in NH they don’t permit customer disconnection of the gas lines. 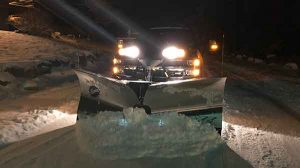 When I bought my first truck with the 5th wheel in 2016, I ordered a snow plow installed. I’m glad I did, I had to use that plow countless times to keep up with snow removal around the camp, and it also came in handy to help the maintenance crew at the treatment center with the roads on property. From 1993 to 2013, while living in New Mexico, I moonlighted as a sno-cat operator at a local ski area, so I was accustomed to working with snow. Plowing roads is very different, so I had to relearn some things. Plowing roads is like being  in a constant collision with the surface of the road, and it’s hard on the truck, so I didn’t get too carried away with it. It was a lot of fun, though, and it certainly kept me connected to the world after a giant storm. 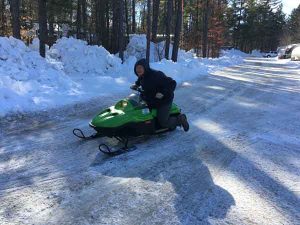 Those 2 and 1/2 winters spent RV’ing in NH were so much fun. As I have returned to the sunny southwest, I often think back on those times. As winter approaches, my friends and neighbors are returning to their winter seasonal spots, only this winter the Olson’s are going further north for better and more consistent snowmobiling conditions. My sled is still up in NH, and while I won’t be winter camping this season, I do plan to head up there and join them when the snow is good, and get some trail rides in! With us, everyone goes riding, adults and kids alike. Sometimes Jeff likes to take a spin on his daughters sled!